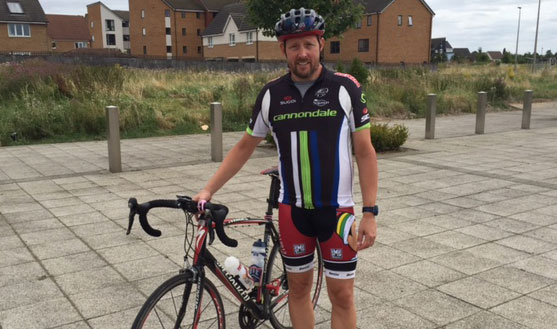 Gavin, owner of BG Bikes, is a very keen cyclist and has been involved in cycling for over 20 years. He has road biked in Europe including Spain and France and ridden many of the Cols in the Alps. He has also mountain biked in France, Greece and USA and ridden many famous trails including `Slick Rock`, `Crested Butte` and `The Porcupine Trail`.

Gavin was first introduced to cycling at the age of 10 when his first bike was a Raleigh Chopper.

He was then re-introduced to cycling in his late 20s when his neighbour invited him for a ride in the local area. Gav had recently invested £90 in a Peugeot mountain bike and later that year he ventured to Wales with his family to do some cycling in the Welsh hills.

It was there that he met John Lloyd who owned Builth Wells Cycles. It turned out that John was Welsh Veteran Mountain Bike Champion (who was founder of the Schwinn 100 and Merida Offroad Series). Having lent Gav a `real` mountain bike Gav then returned with his neighbour in November and participated in the Real Ale Wobble (a fun offroad event in Llanwrtyd Wells – organised by the infamous Gordon Green : founder of Man v Bike v Horse).

And then Cyclone Mountain Bike Club was formed…

It was then that Gav and his neighbour also named Gav were encouraged to start a Mountain Bike Club. (Their `local` club was over 70 miles away – as at that stage mountain biking was very new to the UK and there weren’t many clubs around.) With founder members Pete, Liz and Simon the Cyclone Mountain Bike Club was formed. Big Gav and Little Gav (as they were to be known) organised their first committee meeting and the Club became official. (The name originated from Cycle On, and when combined made the name CyclONe).

Having spent a number of years mountain biking Little Gav and Big Gav started doing some mountain bike racing. Big Gav felt that he wasn’t fit enough to race so invested in a road bike as he thought that would help out? He invested in an all steel Bottecchia and from then on started to compete that much better.

Spinning then became the craze…

In the late 90s Gav began attending the new craze of `spinning` (a gym base cycling class). Then In 2001 he qualified as a spinning instructor and has taught for over 15 years; deciding recently to retire so that he can concentrate on BG Bikes.

Having raced for a few years a colleague from his gym suggested he tried `sportives` (a newly introduced sport that hailed from France) that involved non-competitive cycling on the road. With the challenge in mind Gav treated himself to a new road bike and began on another adventure. Since then Gav has `competed` in many sportives that include The Cheshire Cat, The Etape Du Dales and the infamous Fred Whitton Challenge – for which he got a Gold Accreditation in 2010)

Big Gav is now also a fully qualified cycle guide and is a Ride Leader and Course Divisor for British Cycling and The Sky Ride programme.

He is an active member of The Broughton Cycle Group and guides rides for the club; along with his wife Debbie (who is also a qualified guide.)

Gav’s love of cycling and deep knowledge and experience of all things to do with cycling equip him perfectly to bring this into all of the bikes he refurbishes.